Along with color and type of wood, figure plays a strong part into the veneer that is chosen. Figure refers to the surface effect of the grain. Wood grain patterns are produced naturally as the tree grows. Different wood grains include Bird's Eye, Fiddleback, Pommel and Crossfire etc.

Bird’s Eye
The name itself describes it best. Once considered a defect, the best bird’s-eye flitches are now expensive and in demand. These veneers are most often rotary cut or half-round sliced to produce the most uniform distribution of nice round eyes.

Fiddleback
Fiddleback is clearly visible and regular streaks running across the grain. The more regular the streaks, the more valuable the veneer. Logs for fiddleback veneers are quarter sawn to produce very straight grain with nearly perpendicular curls running uninterrupted from edge to edge.

Curly
Contortions in grain direction that reflect light differently create an appearance of undulating waves known as curly grain. Many species develop this figure, but most commonly maple. Stump and butt sections of trees often produce a diagonal curl.

Mottled
Mottled veneer is an irregular form of figure that runs across the entire surface of the veneer. It can be identified by its wavy spiral-like grain that causes the veneer to have a wrinkled or blotchy figure. The mottled figure may be scattered randomly or appear as a regular checkerboard pattern.

Crotch
Cut from the juncture of a tree’s main branches and trunk, crotch figures are often sub-categorized as flame, plume, rooster tail, feather or burning bush. All of these descriptive terms serve to convey the range of this figure’s appearance.

Burls
Growths on trees produce some of the most prized veneers. Usually available in smallish, often defective sheets, burls feature swirling grain around clusters of dormant buds, rings or eyes.

Pommele
Pommele is a small to medium sized blister figure, the more uniform and heavy the blister, the more valuable. Dense pattern of small rings enveloping one another. It’s usually found in extremely large trees of African species like sapele, bubinga and makore. Crossfire
This term is used to describe all of the various figure marks running perpendicular to the veneer grain. In some wood species the crossfire is a contrast of color, while others appear as an irregularity of the grain creating the illusion of horizontal marks. Flake
This is found only in species that have prominent medullary rays (cells radiating outward from the center of the tree, like the spokes of a wheel.) By slicing the veneer perpendicular to the annular rings and parallel with the rays, a distinctive “flake” within the figure is created. 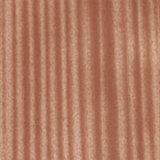 Plain Stripe and Ribbon Stripe
The figure is straight and parallel with the length of veneer as a result of quarter slicing the log. Ribbon stripe is similar but with variable width bands, alternating light and dark, that create the appearance of ribbons. Quilted
This figuring is produced by rotary or half-round slicing of logs that have a “bumpy” surface. The uneven weaving of the growth rings produces a quilted, three-dimensional effect. Maple and Mahogany are species often available with quilted figure. Check with sales for requirements.